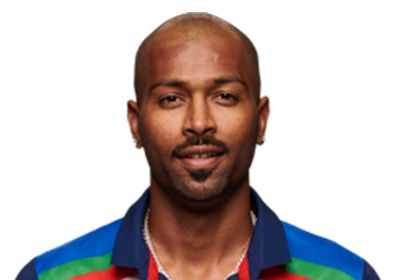 A wiry young fellow from a small town of Gujarat, Hardik Pandya with swanky tattoos and peroxide highlights, exhibits the swagger and charisma of a young Indian cricketer. This all-rounder was boosted into the big stage after regular exposure to prime-time television in the way of the Indian Premier League. His deep voice complements his energy and confidence and shows no sign of playing it safe. Hardik Pandya is certainly the modern representation of audacity. Having gone through the tough grind of domestic cricket, Pandya soon became famous when he was selected by an IPL franchise – a perfect platform to showcase his talent on the big stage.

Similar to various youngsters of the modern era, Pandya announced himself to the world with the IPL, displaying his smashing ability to strike the ball, exceptional fielding, and street-smart bowling that surpassed the cliché performance. He made the cricket world watch in anticipation when he dealt with the pressure and emerged reliable in a crunch situation. Moreover, he played a pivotal role in the second title win of the Mumbai Indians. And he won two Man of the Match awards along the way. The public, as well as critics, who are always up for comparison, have one inevitable question, Did India find its first fast-bowling all-rounder since Kapil Dev?

While being primarily regarded for his explosive batting, Hardik Pandya is also great with the ball. In fact, his all-round skills made him intriguing to the T20 franchise in the Syed Mushtaq Ai tournament. Pandya was named in the ODI squad for the home series in 2016 against New Zealand.

By that time, he had worked well on his swing bowling skills and was regularly hitting 140s, challenging the batsmen with his niggling length. Being a part of the 206 World T20, Hardik defended an equation reading of 2 to win off three against Bangladesh. He bowled back of the length as well as short on the slow wicket, thereby keeping the team alive in the tournament.

Pandya is comparatively new to the national team but has already played some great knocks with the bat in ODIs, scoring fast runs when needed. With the ability to surge when most needed and target a specific bowler, Pandya has pulled off 20-run overs in stressful situations and remained prominent in the ODI format. With MS Dhoni turning into a sheet anchor mode instead of his general swashbuckling mode, Hardik could be crucial for the team and can be in an important partnership with Dhoni.

Although his technique is useful in ODIs, it is not the most effective for non-true wickets. And if he selects Test cricket, Pandya needs to make himself more solid and compact with regards to batting fundamentals. In terms of bowling, he has taken massive strides by perfecting the swing and has figured out the right trajectory for his speed to impart optimum lateral movement on the ball.

Irrespective of whether or not Pandya is the next Kapil Dev of India, he certainly brings a much-required balance to the team. If he continues to be grounded amidst the glamour and further shapes his game under the guidance of his coaches and seniors, he will climb the ladders of international success and recognition. Presently, it will be fascinating to see the energy of blending combined with the maturity that comes from experience.

After the grueling 2018, Hardik Pandya has come out as a more mature cricketer with his good 93 score in Cape Town and a half-century in the team’s only win in the Test series against England. In terms of bowling in Tests, Pandya has come a long way with the extra bounce from the back of the length and his ability to swing the ball against right-handers. While he did not bowl the best deliveries at times, Pandya seems to have a knack for dismissing batters. Moreover, his batting is aggressive but still needs a lot of work. This is because he continues to showcase all-out attack mode, and this approach often fails in a pitch favourable to bowlers.