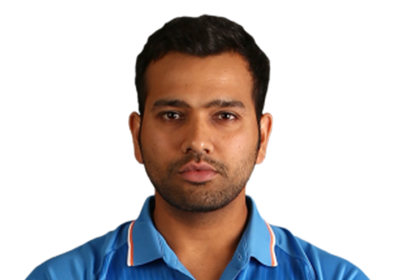 Rohit Sharma is one of the most talented batsmen in world cricket. He has had a phenomenal international career so far, and his skills are only improving with time. His seriousness for cricket became apparent at an early age when he would play cricket games with older boys during his school breaks. After playing some district-level matches in Mumbai, Rohit was selected to represent Maharashtra in the 2006/07 season of the Indian domestic league competition, Ranji Trophy. Known for his aggressive batting style, Rohit Sharma is the only player to score three double centuries in ODI cricket. Experts and fans compare him to some of the greatest of the cricketing world, and why not? He is close to getting 10,000 runs in one-day internationals, has the fastest T20 hundred (in 35 balls), and is a great captain and team player (captained Mumbai Indians to 5 IPL trophies). There’s a lot to know about the ‘Hitman.’ This post focuses on Rohit Sharma’s career stats and puts light into his records.

Rohit Sharma was born on April 30, 1987, in his hometown Bansod, Nagpur. His father played cricket for his local civic team and Rohit grew up playing cricket with his brother on the streets of their neighbourhood. He was selected by former Indian cricketer Mr. Sandeep Patil who attended a camp at Shivaji Park in Mumbai, which is known as one of the best academies in India, where he met Sachin Tendulkar, who was also there scouting talent.

Rohit Sharma made headlines when he scored 264 runs (highest score in ODI) against Sri Lanka during an ODI game at Kolkata’s Eden Gardens in November 2014 – breaking Virender Sehwag’s long-standing record for the highest individual score (219*) set back in December 2011. The innings included 33 fours and 9 sixes. His destructive batting gained him the nickname – the Hitman.

He was introduced to international cricket during the inaugural T20 World Cup in 2007 in South Africa against England, where he was part of the young team India. In India’s match against South Africa, he scored a half-century, which resulted in India winning a do-or-die game and booking a seat in the quarterfinals.

As a result of his performance in the T20 World Cup, Sharma was roped into the India side for a series against Ireland. He made his ODI debut against Ireland on June 23, 2007. However, he did not bat in that match. Since his ODI debut, Sharma struggled to find his touch in ODIs in his early years. He was in and out of the team constantly and was criticised for his poor batting. Before he became a permanent opener, he batted at different spots. Following the poor form, Sharma was dropped from the side for the Cricket World Cup in 2011. Then captain MS Dhoni backed Sharma by giving him opportunities and tried him at different playing positions until he realised that Rohit was the perfect opener. Since then, he has never looked back. Opening for India gave Rohit a new purpose. His playing style changed and his technique improved over time, making him one of the most sought-after players in international cricket.

In 2013, Rohit Sharma made his Test debut against the West Indies. He batted at number 6 and went on to score a brilliant century. His innings of 177 in 301 balls included 23 fours and one six.

Rohit Sharma has also had a successful career in the Indian Premier League, having played for the Mumbai Indians since 2011. He was one of the key players who led his team to win five IPL championships – becoming the only captain to achieve this feat.

He married Ritika Sajdeh in 2015, and the couple has a daughter.

Rohit Sharma and cricket records are a match made in heaven. There are some unachievable feats that Rohit has accomplished.

Rohit Sharma has had a successful IPL career, playing at squad 45. He has been a part of IPL-winning teams 6 times, the most by any player. He was in Deccan Chargers in the second edition of the IPL when the team lifted the IPL trophy for the first time. In 2011, he was drafted to Mumbai Indians and soon became their captain. Under his captaincy, Mumbai Indians won the IPL 5 times – the most by any team. His IPL stats are just astounding.

Rohit Sharma is all set to play in the second leg of the IPL 2021, which was postponed due to the rising number of COVID-19 cases in India. The second leg will be played in the UAE. He was in the news recently for his breathtaking performance against England in the 5-match Test series. He scored a match-winning 127 runs in the second innings of the Oval Test to help his team win the game.