4ranews / Kabaddi / Pro Kabaddi: The Best Records of All Time

Pro Kabaddi: The Best Records of All Time 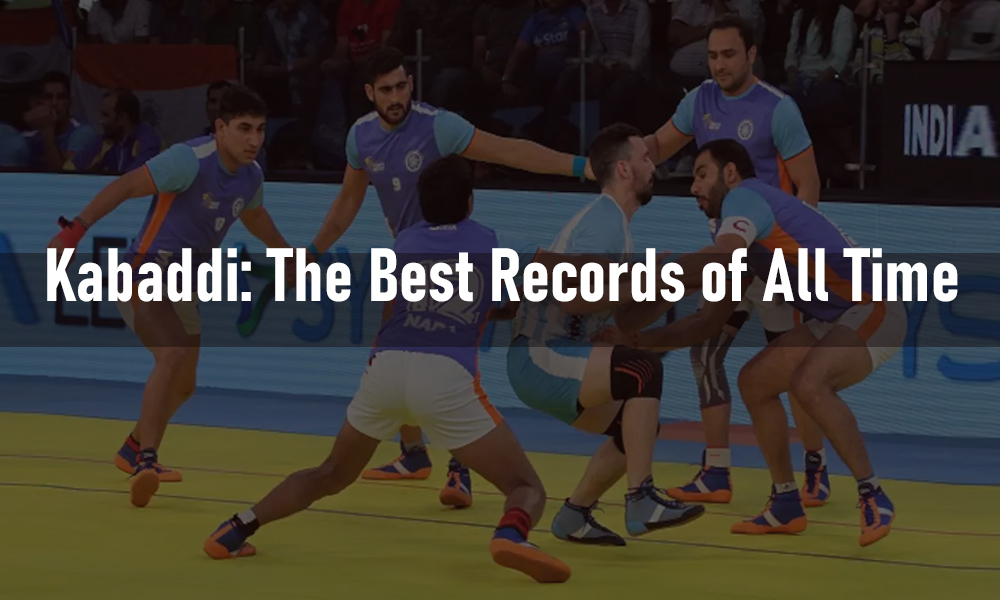 Over the years, the Pro Kabaddi league has gained a lot of traction, and it has intensified the competition in the sport. Having been around for only eight seasons, it is becoming one of the fastest-growing sports worldwide for up to eight seasons. Over seasons, we have seen some impressive records set in the league by amazing players like Pawan Sehrawat, Suraj Desai, and Pardeep Narwal, to name a few. These records span across the most successful raid points earned by a single player, most high 5s, most super 10s, super raids, and so on. Over the eight seasons of the PKL, Pardeep Narwal scored the most total points, raking in up to 1269 points in 121 matches played in the league. Pardeep started his career with Patna Pirates before he went on to join Utter Pradesh Yoddha in 2021. He scored most of his points for the Pirates, having spent seven seasons, and we expect to see him flourish in his newfound home as he is currently still in his mid-20s.

It is no shock to see that Pardeep Narwal is leading another all-time stats section in the raiders department. Even though Pawan Sehrawat has the most successful raid points in season 8 of the PKL with 168 points, Narwal still tops the all-time chart. In Pardeep’s third season with the Pirates, he set a record of arguably the best season for a player in the PKL, leading the league in every raid category.

Pardeep Narwal is arguably the best raider to grace the PKL since its inception. He currently holds the foreground for every raid category in the league, including the most raid points. Pardeep has over 1200 raid points, 1260 precisely, and he is the only player to have scored at least 1000 raid points. The next in line is Rahul Chaudhari coming in at 964, and we expect that we might just see another player cross the 1000 mark. In addition, other players with 900+ points include Maninder Singh and Deepak Hooda.

An all-rounder, Manjeet Chhillar, currently holds the most successful tackles in Pro Kabaddi League records. He started his PKL career as captain of Bengaluru Bulls in Season 1 of the league, while he won the MVP in Season 2. However, he moved to Puneri Paltan in Season 3, where he also was captain until Season 5, when he joined Jaipur Pink Panthers and then Tamil Thalaivas in Season 6.

Deepak Hooda holds the record for the most Do-or-Die Raid Points in the PKL. He currently has 181 points in the league. He started his career as the recipient of the second-highest bid in the league. He was part of the Telugu Titans for Seasons 1 and 2, before he went on to join Puneri Paltan, where he helped the team to make a podium finish in the third season. He is ahead of Rahul Chaudhari, Ajay Thakur, Pardeep Narwal, and Rishank Devadiga in the top five most DOD raid points standings.

Pardeep Narwal is in the lead for another top Kabaddi record. He has scored the most Super Raids points for a single player in the eight seasons. He currently has 55 points, which is almost twice as high as the second position held by Maninder Singh with 28 points. Pawan Sehrawat, Rishank Devadiga, and Rahul Chaudhari occupy the remaining top five places with 27, 25, and 24 points, respectively. However, Ajay Thakur and Kashiling are closing in on the top five spots with 23 points apiece.

Sandeep Nawal, an all-rounder, holds the top spot in the defensive records. With 29 Super Tackles points, Sandeep is one of the best defensive players in the PKL. He is currently ahead of top players like Dharmaraj Cheralathan, Vishal Bharadwaj, Fazel Atrachali, and Jeeva Kumar, with the Cheralthan having 25 points and others tied at 23 points. We could see a change in the rankings depending on how future seasons play out since the points are close.

Pardeep Narwal leads another interesting record in the Pro Kabaddi League. He has the most Super 10s in the league. Even though Naveen Kumar won the most Super 10s points in Season 7 with 22 points, Pardeep retains the overall top spot with 63 points. He is followed by Maninder Singh, Pawan Sehrawat, and Rahul Chaudhari. Then, followed by Naveen Kumar after his 22-point season took him to fifth place at 37 points, beating Deepak Hooda and Ajay Thakur.

Surjeet Singh tops the High 5s overall record, beating veteran all-rounder Manjeet Chhillar with five points. Surjeet currently has 29 High 5s points to his name. Chhillar is second at 24 points, only beating Ravinder Pahal with one point and Fazel Atrachali with two points. Finally, in the top five of the High 5s overall record list is Surender Nada who has 21 points. We wait for season 8 to unfold to see if Surjeet Singh’s record will be broken or not.