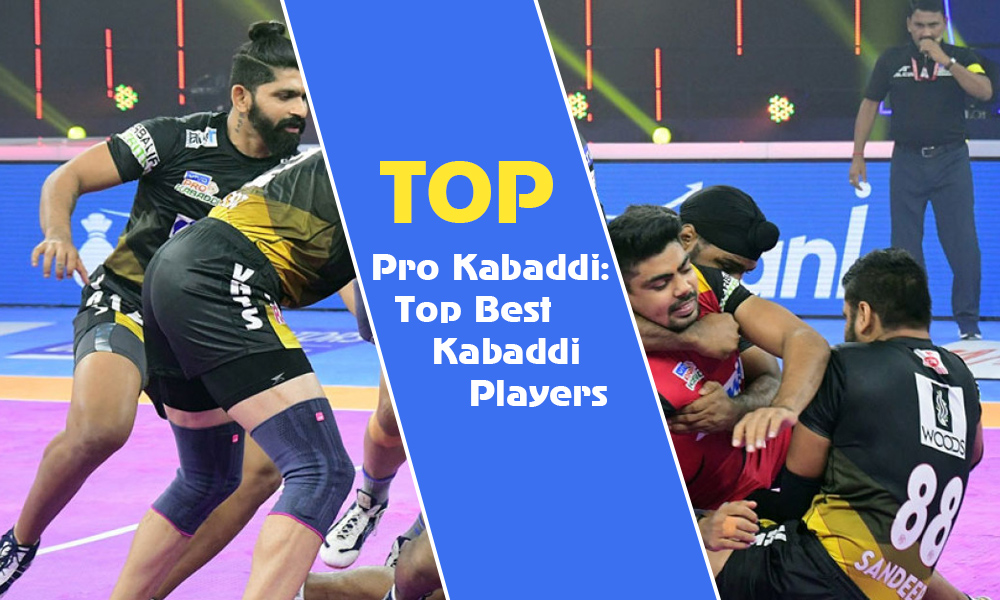 10In this article, we look at the top 10 kabaddi players in the world. In trying to find out who is the best kabaddi player, we have looked at the players’ records in the KPL as well as their exploits with their respective national teams. The following are the most famous kabaddi players to grace the game.

The youngest  on the list of best kabaddi players, Pardeep Narwal is nicknamed the “Dubki King.” Narwal was a member of gold medal-winning India teams at the 2016 World Cup, Asian Kabaddi championship 2017, and South Asian Games 2019. Among his exploits, he is best known for 8 points in a single raid versus Haryana Steelers, the most raid points in PKL, including a record 369 in season 5,. He was also the first to 1000 raid points. Narwal helped Patna Pirates to three titles on the trot, In the 2021 auction, he became the most expensive player in PKL history when he attracted a bid of 1.65 crore from UP Yoddha.

When we consider the best kabaddi players ever to grace the game, we cannot ignore Pawan Kumar Sehrawat. Known as the high flyer of the PKL, Sehrawat scored 271 raid points in season 6 and 346 in season 7. He led Bengaluru Bulls to the PKL title. In 2019, Sehrawat scored 39 raid points in a single match versus Haryana Steelers. He was a member of the gold medal-winning India team in the South Asian Games in 2019.

Known as the poster boy of the PKL, Rahul Chaudhuri aggregated 151 points for Telugu Titans in season 1 (which was the 2nd highest that season). A swift mover who can raid both corners in a single raid, Chaudhuri is renowned for his deft hand touches. He was the 2nd player to 1000 points in the PKL. Chaudhuri was a member of India’s gold medal-winning team at the World Cup 2016.

A raiding allrounder who can also play defence, Hooda has established himself as the most successful allrounder of the PKL. Considered to be one of the craftiest players, Deepak has led Jaipur Pink Panthers (the champions of the inaugural season of the PKL) in two seasons. Hooda was a member of the winning India team at the 2016 world cup, the 2016 and 2019 South Asian Games, and the 2018 Dubai Kabaddi Masters tournaments.

Arguably one of the greatest legends of Indian kabaddi, Thakur is also the most awarded player, having won both an Arjuna award and a Padma Shri. He was a member of the 2016 World Cup-winning squad. In that tournament, Ajay was named the best raider – the highlight of his performance was in winning 68 raid points including a game-changing super 10 in the final versus Iran. With gold medals in the 2007 and 2013 Asian Indoor games, the 2014 Asian games, the 2017 Asian kabaddi championship, Thakur is arguably the most accomplished player ever. Known for his running hand touches and the ability to leapfrog over left corner defenders, Thakur enjoyed an easy scoring ability aided by his height and exceptional skill.

Arguably the GOAT among defenders, Narwal was nicknamed the ‘beast of the right corner’ with his ability to smash rivals with powerful blocks. His accomplishments with the India squad include gold medals in the 2016 World Cup and the 2016 South Asian Games. He spent his first three seasons in the PKL with Patna Pirates. He played a key role in the team’s title-winning exploits in season 3. Dabang Delhi made an attractive successful bid of 60 lakhs for Narwal in the 2021 PKL auction.

Renowned as one of the best defenders of the game, Atrachali became synonymous with ankle holds and powerful blocks. He bagged the  “Best Defender” award twice in the PKL, in 2016 and 2019. He has been in the title-winning side in the PKL on two separate occasions – U Mumba in 2015 and Patna Pirates in 2016. Atrachali has skippered both U Mumba and his national team of Iran, whom he led to a gold medal in the 2018 Asian games. He became the most expensive overseas player in PKL history when U Mumba made a bid of 1.21 crores to retain him in the 2021 auction.

Renowned among the best all-rounders, Chillar is a veritable one-man army, equally powerful in defence and attack. With his ability to defend the left corner is known to scare attackers from rival teams, Chillar has registered the highest tackle points of 339. In PKL season 2, he led Bengaluru Bulls to the finals. He was acquired by Dabang Delhi in the PKL 2021 auction. Chillar was a member of the 2016 World Cup-winning Indian team.

Anup Kumar led U Mumba to their maiden PKL title in season two. Known for his unique “toe touches,” Kumar earned the epithet of  “Bonus Ka Badshah,” with his ability to gain bonus points when a rival team has six or more defenders on the mat. Anup has won gold medals for India in the 2010 and 2014 Asian games, as well as in the 2016 South Asian Games. He spent several years as captain of India’s kabaddi team. He skippered India in the 2016 Kabaddi World Cup, in which India beat Iran in the final to lift the trophy. Kumar quit the game in Dec 2018 after a 15-year career and is currently the franchise coach of the Puneri Paltan team.

Known to be a versatile player, Sheykh is the current skipper of Iran’s kabaddi squad. He led the team to a silver medal in the  2016 Kabaddi World Cup. In the PKL, Sheykh is considered the “go to” man in a crisis. After six seasons representing Telugu Titans and Dabang Delhi in the PKL, Sheykh could not feature in the 2021-22 season owing to injury.