The Best Raids in PKL History 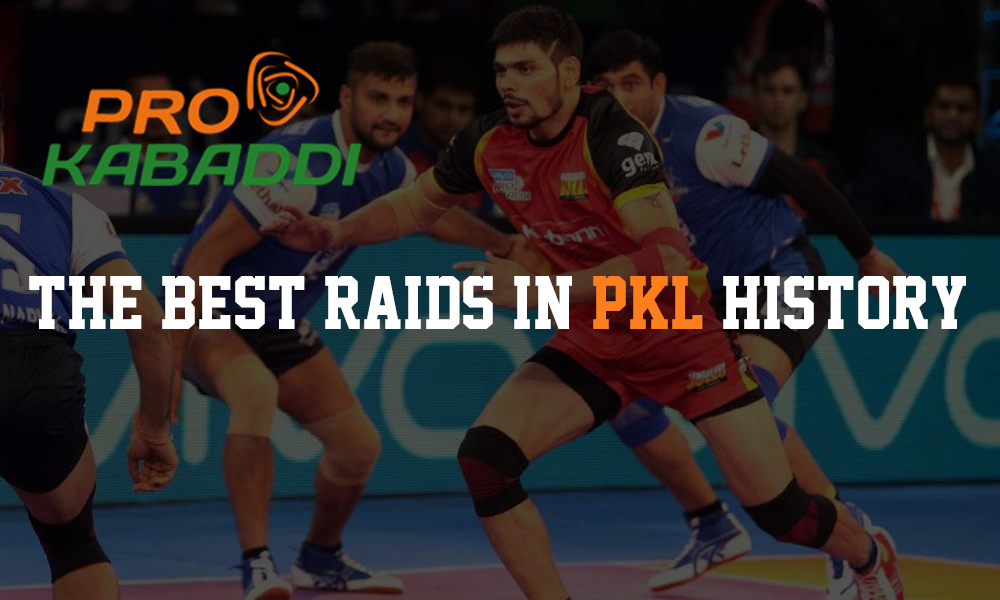 Even among full-contact sports, Kabaddi is near the top of the high-intensity list. The sport requires tremendous strength, agility, intelligence, and a razor-sharp gut instinct to be successful. While defending is an integral part of the sport, there’s no aspect where all of the aforementioned qualities are more essential than when raiding.

Raids in Kabaddi are the best way to score, with a lot more points available than when defending — especially on the pro scene where points from lesser infractions are all but ironed out by well-disciplined squads. This is why names of famous raiders such as Pardeep Narwal, Ajay Thakur, and Maninder Singh will resonate through the hallowed upper echelons of Kabaddi legend.

This being the Pro Kabaddi League, raids are much more than what one might see in local or regional matches. Packs of strong, powerful, and unforgiving defenders hound every move of any aspiring raider, ready to grapple them down given the tiniest of chances, or bulldoze them out of the court should they fail to keep themselves firmly grounded.

Nevertheless, great raids happen several times every game at this level, and there have been a few raids over the years that have left the audience with their hearts racing and mouth gaping. Here are some of our favourite raids from the PKL.

A solid all-round Kabaddi player, Jaipal is known for his lightning-fast running hand touches and vice-like waist hold. While playing for the Bengal Warriors in the early years of the PKL, he pulled off a spectacular Super Raid.

With the game in a tightly-contested state, he brought home three important points to increase his side’s slender lead by beating three of the Titans’ defenders. To top it off, he did so while also debilitating the opponent’s offensive players, limiting their chances of a swift rebuttal.

Adake has been an exciting player throughout his PKL career, regularly producing fantastic raids to boost his team. In this instance, he was playing for U Mumba against the Haryana Steelers, and managed to execute a gutsy, tenacious raid that picked his team out of the jaws of defeat and landed them the win.

With the match on the line, Kashling missed his kick only to get back into the thick of the opponents’ side before wresting himself free from a defender’s ankle grab while also dodging two other defenders in what can only be described as an epic move. Mumba went on to win the match by the barest of margins at 29-28.

Widely regarded as one of the best players in the PKL, Singh is a powerful attacker who took the Bengal Warriors to their first PKL title in Season 7. This story, however, comes from two years prior.

Back then, Singh was still the star player for the Warriors, but he wasn’t as good as he later became. In the match in question, he proved his worth with a stunning Super Raid. While being chased by no less than three defenders, he managed to somehow spin away from their grasp and reach the midline, bringing his team crucial points.

The Thalaivas may not be the most successful of PKL teams, but Ajay Thakur is definitely one of the all-time greats of the tournament and the sport as a whole. With countless brilliant performances to his name, Thakur is always likely to come up with some beautiful attacking action.

In this instance, the Thalaivas were behind the Yoddha by just one point with a mere 30 seconds left on the clock. Thakur moved into enemy territory, and in a haze of mind-boggling skill and speed, picked up 3 points within just five seconds before somehow managing to wrestle free from three defenders to touch his half.

What can we even say about this raid that has not been said before? Considered by most to be the de facto greatest raid in not just PKL, but professional Kabaddi as a whole, the Dubki King’s finest attack remains as beloved as his countless other records.

This magical sequence of events happened when three-time PKL winners Patna Pirates went up against the Haryana Steelers in Season 6. Narwhal was deep in the Steelers’ half and surrounded by as many as six defenders when he faked a Dubki, dived, and somehow managed to put his hand across the midline having bagged no fewer than 8 points in a single raid — which remains a record to this day.