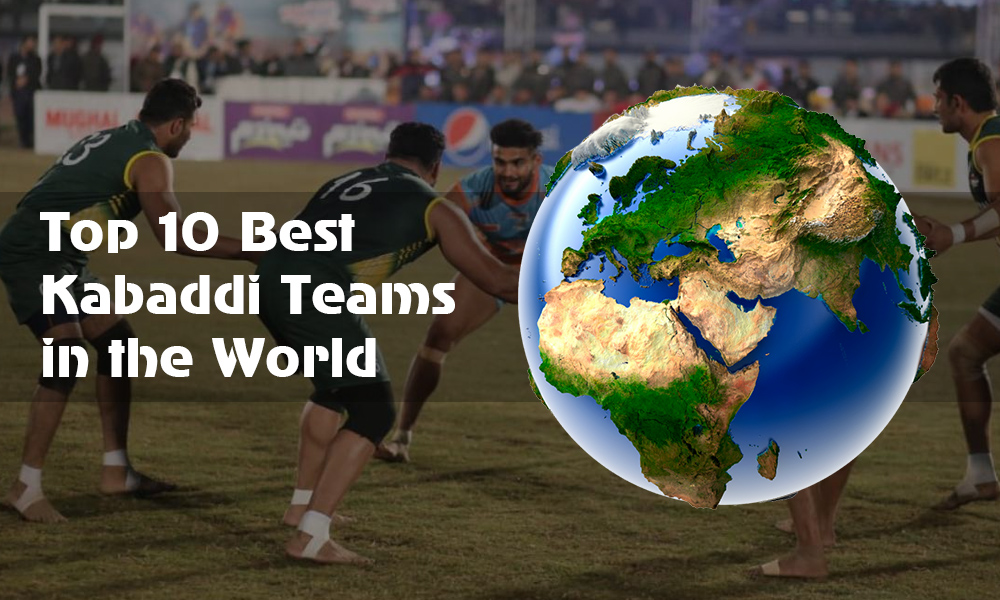 In this article, we consider the top 10 kabaddi teams in the world as ranked by the International Kabaddi Federation. We explain how the ranking points are calculated and look at the performances of these teams in international competitions over the years.

How the IKF Calculates Ranking Points

The IKF uses the following formula to calculate points at the end of each international match:

Thus, for example, if India beat Iran 30-25 in an international competition comprising of 10 teams, 130 points would accrue to India as follows:

India have dominated the medals tally in international competitions. They have won 3 gold medals in world cups (standard style), 6 golds and 1 silver in circle style World Cups, 7 golds and a bronze in the Asian Games, and 10 golds and a silver in the South Asian Games. India is also home to the world’s best kabaddi league – the Pro Kabaddi League – which attracts players from across the world.

Iran have shot up in the world rankings thanks to their brilliant performance in the 2018 Asian Games in which they finished in first position. Apart from that medal, Iran have also won two silvers in Asian Games, to add to three silvers in Standard Style World Cups, and two bronzes in Circle Style World Cups.

Pakistan have established themselves as a top kabaddi team despite never having taken part in Standard Style World Cup events. However, they have compensated with six medals – including a gold, 4 silver, and a bronze – in Circle Style World Cups, 8 Asian games medals, including two silvers and 6 bronzes, and 11 South Asian Games medals, comprising of a gold, 6 silvers, and 4 bronzes.

Like Iran, South Korea have shot up the world rankings thanks to their great performances in the recently held Asian Games in 2018 where they subjected favourites India to a shock defeat. South Korea have won a silver and a bronze medal to add to a solitary bronze won in the Standard Style World Cup event of 2016. South Korea have also done well in other international competitions such as the 2018 Dubai Masters in which they reached the semi-final.

Sri Lanka owe their high position in the world rankings largely due to their showing in the South Asian Games in which they have won one silver and two bronze medals. Sri Lanka have also reached the quarter-finals or better at international competitions such as the World Cup and the Asian Indoor Games.

Kenya had an interesting start to their international kabaddi career, with the national team formed days before the Circle Style World Cup of 2016. Though they are yet to win medals at world events, Kenya have been performing creditably on the international stage. Several Kenyan players have signed lucrative contracts in the Indian Kabaddi League.

Like Sri Lanka, Nepal have benefited from medal victory in the South Asian Games, with a solitary bronze medal won in 2010. Nepal have also shone in regional competitions such as Bangladesh’s Bangabandhu League held in 2021.

Thailand have a solitary standard style world cup bronze medal to show for their continual improvement in kabaddi. Thailand have also won medals in the kabaddi event at the Asian Indoor Games. The sport — including the women’s game — is becoming increasingly popular in the country.

The growing popularity of kabaddi in Indonesia was given a boost when Jakarta hosted the Asian Games in 2018. To their credit, Indonesia finished joint-fifth alongside Bangladesh.