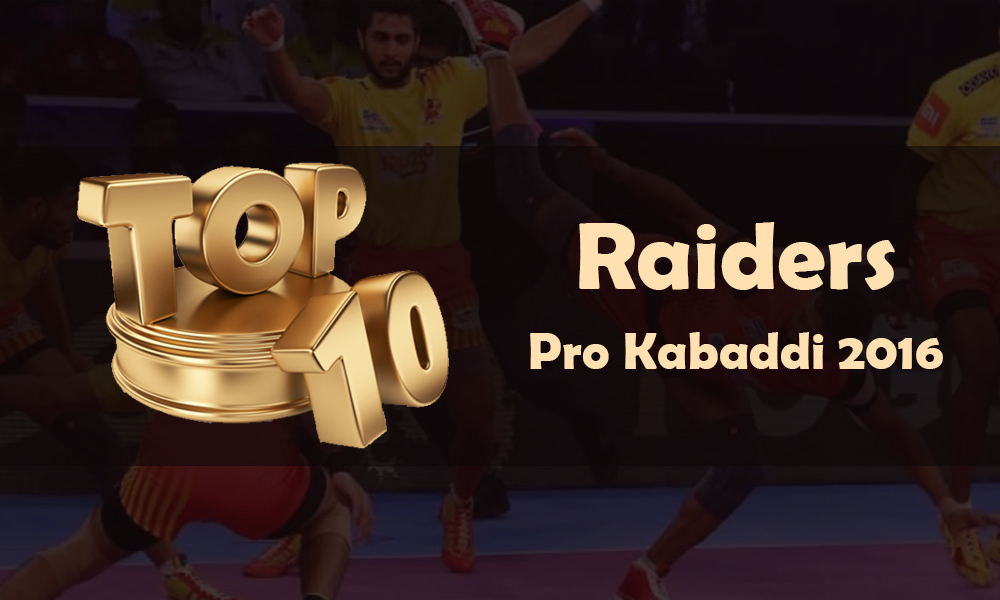 The Kabaddi season has arrived, and fans seem to be more excited than before. It is the much-awaited thrilling tournament that is taking place after the horrifying past years of the pandemic. The hype for the game has increased significantly with the last match played between the Gujarat Giants and the Haryana Steelers in Bengaluru, where Giants registered a victory.

With the absence of the famous raider Naveen Kumar, Dabang Delhi KC faced a defeat against the U Mumba in this later evening match on Feb 1, 2022.

This season brings a lot of promises, new faces, and more nail-biting actions. With the onset of the tournament, it is the right time to check out the top 10 raiders in Pro Kabaddi 2016 to get insight on who possesses the best capabilities of accelerating the thrill of the tournament.

Below is a table representing the top raiders with the most raid points in Pro Kabaddi 2016. So, take a look.

Rahul ranked first in the list of Pro Kabaddi top raiders in 2016. His career took a bright path in Telugu Titans from the second season of this prestigious tournament.

With 146 raid points and 110 successful raids in 16 matches, he accelerated at the topmost point of the player’s scoreboard in 2016.

Apart from his captaincy issues in the past, the player portrays true potential and dedication as the real threat and nightmare for the opponents.

He was just 23-years old when he came from Bijnor and registered his name at the top raiders list in 2016. He still remains a worthy raider, potential enough to make even the best of defenses nervous.

Over the last few years, Rahul has progressed immensely and established a reputation for not coming back empty-handed after a raid. Kabaddi-enthusiasts are expecting a lot from him this season, and he can surely be on the top of the table again.

This 25-years old raider from Haryana created history with his remarkable performance in 2016. Pardeep, one of the best raiders from Patna Pirates, is currently playing for the UP Yoddha. He led the Telugu Titans to win three PKL titles and holds multiple records in this tournament.

In 2016, he stunned every fan with his aggressive strategy and his unpredictable ‘dubkis’ in the crucial event matches. He, and Rohit Kumar, gave one eye-pleasing performance after another in the third season of Pro Kabaddi 2016 and helped their team to its first-ever victory in this league.

With 131 raid points and 100 successful raids in 16 matches, Pardeep never failed to impress the audience and terrify the opponents in the 2016 season.

With his years of practice, experience, and dedication, he has grown much stronger, wiser and better than before. This year, he is marked as one of the key equestrians of UP Yoddha, and fans can’t wait to witness what he does this season.

This Kabaddi raider needs no introduction as he’s the Indian national Kabaddi team captain. In 2016, Hooda joined the Puneri Paltans and led the team to the path of a podium finish. He is currently playing for the Jaipur Pink Panthers.

Bagging third place in the list of top 10 raiders in Pro Kabaddi 2016, Deepak made 108 successful raids with 126 raid points in just 16 matches of the third season.

Played alongside the great Indian Kabaddi players, he resembles the quality of a true captain and a great raider. His capabilities never disappointed the fans, and they expect the same this season too.

Rohit was the captain of the Bengaluru Bulls for the PKL 2016 season and led the team to some classic wins in the tournament. Currently, he is playing for the Telugu Titans this season. His records from the third and fourth season of PKL show an impeccable performance and a turning point for his career. He has a great impression among the Indian Kabaddi fans.

He went straight up the ranking table with 75 successful raids and 93 raid points in 14 matches to be the fourth top raider of the 2016 season. Over the years, Rohit summoned all the expertise, practice, and tactics he needed to make his new team victorious.

With great potential comes great responsibilities, which fans expect from him this season.

Jasvir is one of the most consistent and best raiders in the history of Indian Kabaddi. He formerly served the first four years of his PKL career for the Jaipur Pink Panthers. From 2018 onwards, he has been the star raider of Tamil Thalaivas. This gold medalist in Kabaddi from Panipat possesses true qualities, dedication, patience, and strategy to win a critical game.

In 2016, he managed to be on the top 10 raiders list with the fifth position. He had successfully completed 64 raids in that season with 82 raid points in just 14 matches for the Pink Panthers. His sheer will and determination can be the key to his excellence in the game. The Kabaddi fans are waiting to see how he performs this season and what rank he will conjure this season.

The remaining top five contenders of PKL 2016 were Kashiling Adake, Anup Kumar, Rishank Devadiga, Rajesh Narwal, Ajay Thakur, Meraj Sheykh, respectively. The tenth position was jointly held by the star raiders Ajay Thakur and Meraj Sheykh. Each of them had shown excellence in their gameplay, which led them to enter the record table. Fans’ hope to see all these names in this season’s ranking table is heightened.