4ranews / Cricket / Top 10 Test Keepers with the Most Stumpings

Top 10 Test Keepers with the Most Stumpings 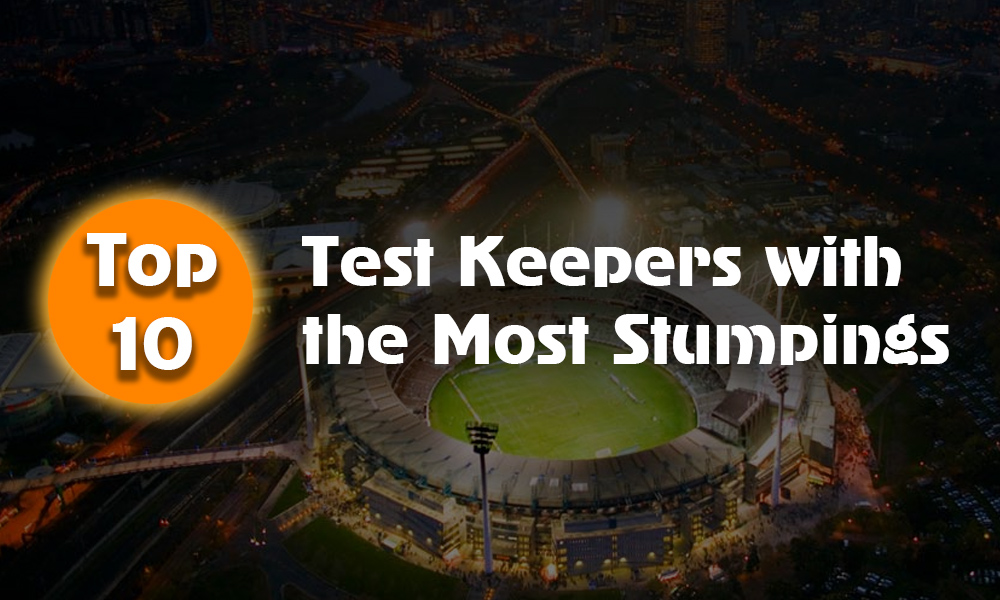 While fast bowlers don’t often need to worry about batters coming down the pitch, this is a very real issue for spinners or even medium pacers. Having a batter come down the wicket and slap the ball high over your head and into the stands is one of the most insulting feelings a bowler can feel.

To counteract this, the keeper has the ability to stump a batter out should they stray out of the crease. This requires razor-sharp reflexes, and the skill often separates good keepers from great keepers. Here are the 10 keepers with the most Test stumpings over their careers.

Most stumpings in career

Popularly known as Bert, Oldfield was the main keeper for Australia between the great wars. He only averaged 22.65 and his highest score was a meager 65*, but he was nevertheless prolific behind the sticks. In 101 innings, he caused 130 dismissals, of which a ridiculous 52 were stumpings, which is an incredible stat in terms of innings played to stumpings made ratio.

Where Oldfield played for the Aussies between the wars, Evans was the mainstay for their rivals in the postwar years. He had an even worse batting average than Oldfield at 20.49, but had two centuries under his belt. Playing 175 innings, he managed to aid in 219 dismissals, with 46 of those coming as stumpings.

An Indian legend despite pretty ordinary batting figures, Syed Kirmani was nevertheless a great keeper and played a big role in the Indian cricket team, including winning the ODI World Cup with them. His Test average was a mediocre 27.04, and like Evans, he had two centuries to his name. Over the course of 151 innings, he caught the batter out of his area 38 times.

Another Indian joins the ranks in the form of Captain Cool himself. An absolutely legendary cricketer in every format, Tests were perhaps Dhoni’s weakest — which is more of a compliment to his abilities in the other formats than an insult about his prowess in the 5-day game. A sharp, smart captain whose mere presence on the field inspired others, Dhoni averaged 38.09 in Tests and had 6 hundreds to his name including a double century. As far as dismissals go, he facilitated 294, with as many stumpings as Kirmani before him — but in 166 innings.

We go from one bonafide legend to another with Adam Gilchrist. Gilly essentially redefined the keeping role, making it so that every other team scrambled to find a keeper-batter as good as him. Very few did, and Gilly made his name as one of the best to ever don the keeping gloves. Over the course of his career, he averaged a terrific 47.6 and had 17 hundreds to his name. With the gloves on, he made 379 dismissals in 191 innings, with 37 of those coming in the form of stumpings.

Although not as popular a player as some others on this list, the second most popular Jayawardene to come out of Sri Lanka was Sri Lanka’s keeper for 58 matches in between Kumara Sangakkara’s tenure. A decent cricketer by his own right, he averaged 29.50 and scored 4 centuries during his career, with a commendable 156 dismissals — including 32 stumpings — from 102 innings as a keeper being the most impressive stat about him.

Healy may not have had Gilchrist’s numbers in any field that mattered, but he was nevertheless with Australia through some tough times for the team, and is a beloved figure in the cricketing community down under. He averaged 27.39 and had four 100+ scores to his name as far as batting goes, and as a keeper he played 224 innings to make 395 dismissals, of which 29 were stumpings.

A keeper who definitely wouldn’t have made the cut in today’s cricket, Bari averaged a mere 15.88 with the bat and had a high score of 85. The only real reason he was on the team, quite possibly, is that there wasn’t anyone better for Pakistan back then. Nevertheless, Bari was decent as far as his wicket-keeping duties were concerned. Out of his 228 dismissals across 146 innings, 27 were stumpings.

‘Little Kalu’ — as he was lovingly monikered by the late great Tony Greig — was a highly volatile hit-or-miss batter, but as a keeper he was pretty solid despite his short stature. Usually overshadowed by his massively talented opening partner Sanath Jayasuriya, he was neither as gifted nor as technically sound, but occasionally got a few good innings going. He had 3 centuries to his name in Tests, and averaged 26.12 with the bat. However, Kaluwitharana made 26 stumpings in just 85 innings, which is a fantastic statistic.

We round up our list with the late great Jack Blackham. The granddaddy of all wicket keepers, he played the very first Test ever and went on to play 34 more Tests (quite a feat for the time). He may have only averaged a miserable 15.68 with the bat with a high score of 74, but as a keeper he pulled off 24 stumpings in just 57 innings. Granted, batters back then were still pretty much semi-professional, but at the end of the day, so was Blackham.