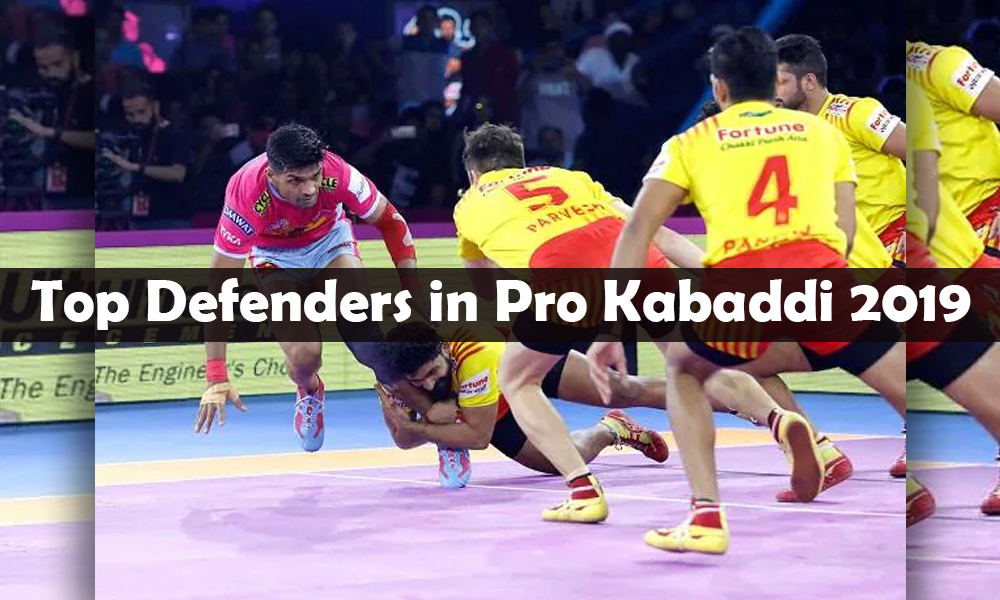 In this article, we consider five players that we rank as the top defenders in Pro Kabaddi 2019. The defender’s role is important even though normally the limelight is stolen by athletes always looking to attack the prey. In ranking the defenders of PKL 2019, we have taken the number of tackle points as the most important criterion.

Iranian-born Fazel Atrachali was the most successful defender of PKL 2019, earning 82 tackle points from 24 matches. In the bargain, the U Mumba skipper helped his team to the semi-finals round in which they lost to Bengal Warriors who went on to win the title in season seven. One of only two players to be named best defender in more than one season, Atrachali has become the first overseas player to achieve 300 tackle points in the PKL. With an uncanny judgment of when to attack and when to wait his turn, Atrachali is renowned for showcasing his strength in the dash, a move he has become identified with. Raiders of rival teams are wary of the threat posed by the left-corner defender who ended up in the title-winning squad twice before. In season 2, he helped U Mumba to their maiden title before going on to do the same for Patna Pirates two seasons later. Atrachali first came into the limelight when he featured in the Iranian national squad that lost to India in the title clash of the 2016 World Cup. Two years later, the Iranian superstar skippered his national side to a gold medal in the Asian Games.

A left corner defender in the UP Yoddha side, Sumit has garnered 77 tackle points from 22 matches to rank second on the list of top defenders of Pro Kabaddi 2019. Sumit has also notched up 7 high fives, the most in season seven of the league. His team’s brilliant defensive record is attributed to Sumit’s uncanny understanding on the match with childhood mate Nitesh Kumar who guards the right corner. In season six, the pair helped UP Yoddha to the knockout stage of the competition after the side finished third on the league table.

After Nitesh Kumar was discovered during the Future Kabaddi Heroes program, UP Yoddha drafted him into the side in 2017. Hailing from an obscure Haryanvi village, Adampur Dadhi, Kumar did not take long to make an impact in the PKL. He was named the league’s best defender in the 2018 season. Most remarkably, Nitesh rattled up 100 tackle points that year, becoming the first-ever player to reach the three-figure mark in a season. Known for his signature ‘ankle hold,’ Kumar darts forward to the midline before he executes the move, which is a combination of grip and strength. Confronted by the move, rival team raiders tend to take a backward step, inviting the defender to a tackle. Skippering UP Yoddha in season seven, Nitesh Kumar played 23 matches to aggregate 75 tackle points.

With a half dozen super tackles in 2015 while playing for Dabang Delhi KC, Sandeep Kumar Dhull announced his arrival on the Pro Kabaddi scene. After playing for Telugu Titans in the following season, Dhull had to sit out season five. Jaipur Pink Panthers drafted the ace defender into the side in season six, allowing Dhull to seal his comeback with the second-highest score among left corner defenders in the PKL. Continuing with the Pink Panthers in 2019, Dhull used the season to advertise his thigh hold. Rival raiders were never prepared for Dhull’s preceding dive from a distance before being brought to the ground by the defender’s vice-like grip on the thigh. While exceeding 200 tackle points in his career, Dhull celebrated season seven with 73 tackle points in 22 games.

Hailing from Dabhota village in Himachal Pradesh, Baldev Singh was spotted and drafted in by Bengal Warriors. Featuring in his first campaign in 2018, Singh totted up 28 tackle points from 18 games. His performance caught the attention of national selectors and Baldev was soon traveling with the Indian team to the South Asian Championships held in Kathmandu. After helping the national side to the title, Singh represented Bengal Warriors for a second year running in the PKL 7 season. Defending the right corner, Singh aggregated 67 tackle points, helping the Warriors to their first-ever title triumph in the PKL. Six high-fives — the highest in the competition — defined the highlight of his performance.