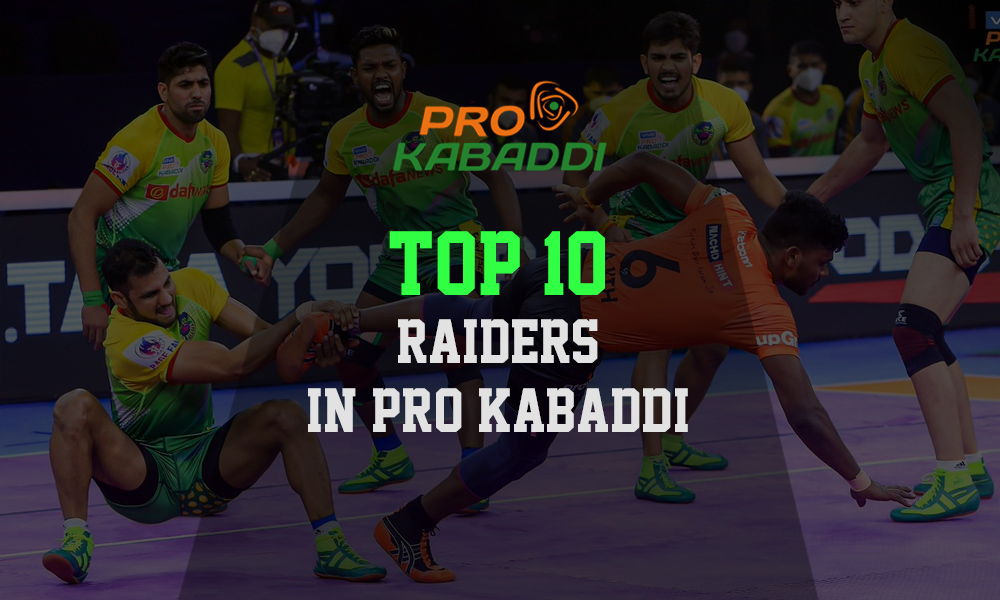 In this article on the top raiders in Pro Kabaddi, we have considered most raid points in Pro Kabaddi as the main criterion in ranking the players. We have a clear leader in Pardeep Narwal who has the best stats for the number of successful raids, raid points, and total points won.

While considering Pro Kabaddi top 10 raiders, Pardeep Narwal is the first name on the list. Statistically, Pardeep is ahead of every other raider, whether in terms of the number of successful raids, raid points, or total points. Nicknamed the Dubki King, Narwal is the first Pro Kabaddi player to 1000 raid points as well as the first to 50 super raids. Pardeep began his pro Kabaddi career in PKL Season 3 when he featured for Patna Pirates. On the back of Narwal’s performance, the Pirates won three back-to-back titles. In the 2021 auction, UP Yoddha bid 1.65 crores for the champion raider, making Narwal the most expensive player in PKL history.

Rahul Chaudhuri is the only raider other than Narwal to have registered 1000 points in PKL history.  Nicknamed the ’Showman,’ Rahul Chaudhuri is renowned as the poster boy of the PKL. Chaudhuri made an instant impact while representing Telugu Titans in season one, when he aggregated 151 points, the second-highest total that season. He was rewarded with the captaincy of the team. Though he could not lead them to a title win, experts continue to discuss Rahul’s exploits in season four when he garnered 146 rid points in 16 matches to help Titans to the semi-final. Synonymous with running hand touches, Chaudhuri can switch-raid from corner to corner. Featuring in the World Cup-winning Indian team of 2016, Chaudhuri has shone at the world level.

Deepak Hooda is not only one of the best raiders in Pro kabaddi history, he is also one of the most talented all-rounders the game has seen. Beginning his career with Telugu Titans in season one, Hooda has since been grabbed by Jaipur Pink Panthers who won the inaugural PKL title in 2013. A raiding all-rounder, Deepak has played as a defender depending on his team’s need. An established match-winner, Deepak is known to set a game alight with his swift hand touches aided by his uncanny ability to cover the whole court in split seconds.

Skipper of the Bengal Warriors, Maninder Singh led his side to their maiden PKL title in 2019. Singh set a record by becoming the fastest to 500 raid points, achieving the mark in only 56 matches. Known for his tactical acumen, Maninder often outthinks rival defenders and deceives them with calculated moves. After sustaining an injury in season one, Maninder had to sit out the PKL for the next three seasons. But after his successful return to the league in season 5, Maninder has not looked back.

With his advertised ability to jump five and a half feet in the air to clear a defender, Sehrawat has earned a reputation as the PKL’s highflyer. After a low-profile start to his PKL career, Pawan came into his own in season 6 when he skippered Bengaluru Bulls to the title on the back of his 271 raid points. In season 7, Sehrawat came close to breaking the record for the most raid points in a season, garnering 346 raid points from 24 matches. The highlight of the season was his tally of 39 raid points versus Haryana Steelers to set a new mark. The national selectors rewarded Sehrawat with a place in the gold medal-winning Indian team at the South Asian Games in 2019.

Renowned for leap-frogging over defenders in the left corner as well as deft running hand touches, Ajay Thakur has combined his height and skill to establish himself as one of the best raiders the game has witnessed. A living legend of the game, Ajay Kumar is a much-decorated athlete, having won both the Arjuna Award and the Padma Shri. Thakur was a member of the World Cup-winning Indian squad of 2016. After garnering 68 points, Ajay was named the best raider of the competition. Ajay also won gold medals in the Asian Games in 2014 and the Asian Kabaddi Championship in 2017. Earlier, Thakur was a member of India’s gold medal-winning squads at the Asian Indoor Games in 2007 and 2013.

Known for his calmness under pressure, Rohit Kumar has established himself not only as a top raider but also as a brilliant leader, skippering Bengaluru Bulls to the PKL title in 2018. Kumar, who began his PKL career with Patna Pirates in season 3, was named the MVP of that season after helping the side to their maiden title. Kumar became the first player to top 30 points in a single match. Impressed by Kumar’s brilliance, the national selectors named him to the India squad for the South Asian Games in 2016.

A fitness freak, Rishank Devadiga leaves no stone unturned in his training routines. The preparation has shown in his brilliant performances across PKL seasons, especially in his penchant for do-or-die raids. Shining for his state, Devadiga led Maharashtra to a Senior National Kabaddi Championship title in the 2017-18 season. After playing for U Mumba in seasons one through four, Devadiga was signed by UP Yoddha. In season 3, Devadiga had his best showing, garnering 115 points from 16 matches, the second-highest tally of the season. The national selectors named Devadiga to the India squad in 2015.

Nicknamed Naveen Express, Naveen Kumar has lived up to his reputation as the speediest raider in PKL history. On the back of Kumar’s showing, Dabang Delhi reached the final of season 7. Unsurprisingly, Naveen was named the MVP of season 7. In the process, the young raider — he will turn 22 on 14 February 2022 — became the fastest to 500 raid points in just 47 matches. Known for scoring super 10s at will, Kumar has the highest average points per match of 11.26, leaving even Pardeep Narwal behind.

Currently the skipper of Haryana Steelers, Vikash Kandola had a quiet start to his PKL career with Dabang Delhi in season 4. But in the following season, Kandola featured for Steelers with much acclaim. Continuing his good form in season 6, Vikash scored 177 points, the highest among his Steelers teammates. Known for his agility and speed, Kandola continued to make an impact in season 7 to establish himself among the top 10 raiders in PKL history.