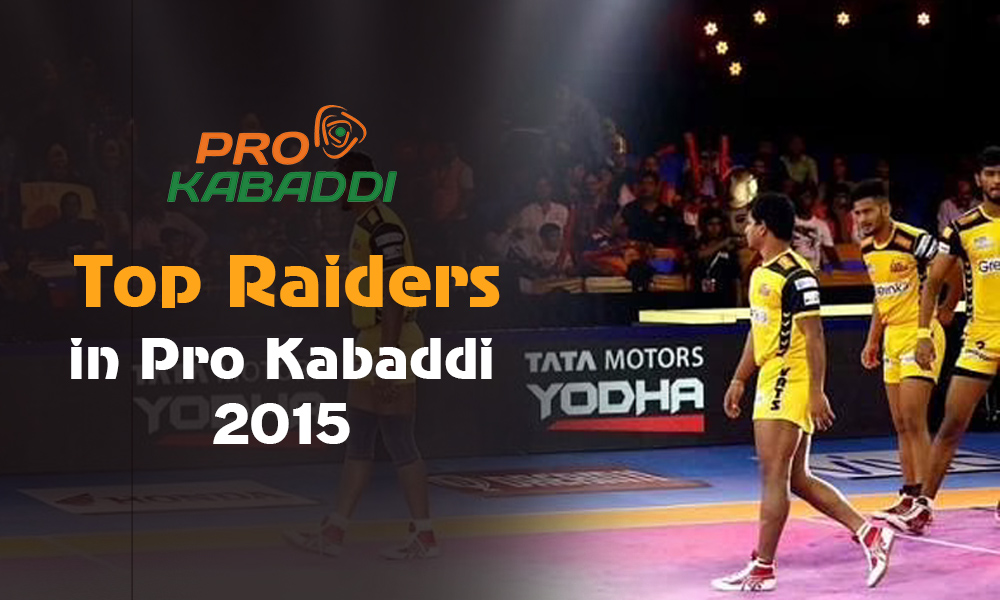 Back in 2015, during PKL or Pro Kabaddi League’s, U Mumba won the league by defeating the Bengaluru Bulls. The finals took place in Mumbai at NSCI or the National Sports Club of India.

Apart from that, the Telugu Titans secured the 3rd position by beating the Patna Pirates in this particular season of PKL. U Mumba and the Telugu Titans would have not been able to achieve victory without their dedication and hard work.

But the ones who have heavily contributed to the teams are their raiders. Through this article, you will learn about some of the top raiders in Pro Kabaddi 2015 who have played incredibly well for their respective teams.

Under this section, you encounter some powerful raiders of PKL of the 2015 season.

Kashiling Adake is currently one of the best and only raiders who has scored over half of the raid points of the whole team during the 2015 PKL season. Adake’s brilliant performance has helped top the list for being the best raider, and his team, Dabang Delhi’s hopes for qualifying at the Top 4 of the 2015 season depended heavily on Adake. He performed well for his team, and because of that, Kashiling was awarded the best raider in Pro Kabaddi 2015 award.

The raider of Telugu Titans had a brilliant season. Even though his score is way lower than Adake’s, his consistent form has helped his team consolidate the 2nd position at the points table during the 2nd season. Chaudhari was also the 2nd player to have the most-highest raids in that particular season. However, those raids were not good enough for the Telugu Titans to get a place in the finals.

The raider of the Bengaluru Bulls, Ajay Thakur, has performed pretty well after he was back into form quite late in the league. He blew out cold and hot during the entire season, but he did make a comeback in full force during the later stage of the 2015 season.

Thakur has performed remarkably well in the later stages of the tournament, which helped him earn 79 points. Apart from that, he had 56 successful raids and was also crowned as the star raider.

The captain of U Mumba had been performing brilliantly since the tournament’s starting.

Even though he didn’t get the chance to score many raid points in the 2015 season, he was in excellent form, and he claimed that the strategies of all the teams had changed during that season.

Known as the Captain Cool of U Mumba, he played many empty raids and eagerly waited for the defense to get points for the team. But when there was a lot of pressure, Kumar stood out as a reliable force to bank upon.

During the finals, he helped his team win against the Bengaluru Bulls. But that’s not all. Anup Kumar became the star raider for his team as well.

Jaipur Pink Panther couldn’t replicate the form they had during the 1st season in the 2015PKL. Even though the 1st season’s champions performed well and won most of the games, their raider Rajesh Narwal couldn’t help JPP reach the Top 4 in this year’s PKL. However, Narwal scored 69 raid points and had 54 successful raids. He is the 5th player in the 2015 PKL season to have the most successful raids.

Bengaluru Bulls captain is someone whom you cannot keep out of any match. Be it defending or raiding. Manjeet Singh performed well not just as a player but also as a captain. Even though he failed to help his team gain victory during the PKL 2015 season, he did score 67 points and had 60 successful raids.

Puneri Paltan started extremely well during the 2nd season of the 2015 PKL. The team did have a bit of ups and downs but was unsuccessful in reaching the finals. Even though they didn’t get the chance to win the tournament, their raider Wazir Singh did help his team gain victory in all the games they played. He yielded 65 raid points for his team.

Rajesh Narwal was not the only raider of the Jaipur Pink Panthers who contributed heavily. Jasvir Singh also performed well for his team and scored 64 raid points. He played brilliantly when the team was under pressure and helped his team win most of the games during the 2015PKL season.

Another star player of the Telugu Titans after Ajay Thakur also made a name during the 2nd season of the Pro Kabaddi League. Sukesh Hegde also played well for his team and yielded 62 raid points for his team.

Dabang Delhi’s Rohit Kumar Choudary is another raider after Adake, who played well for his team during the 2nd season. He was in excellent form and scored 61 raid points for his team.

This article contains information about some of the best raiders from the 2nd season of the Pro Kabaddi League.

Here is a table that contains the name of the top 10 raiders of 2015PKL and their raid points.