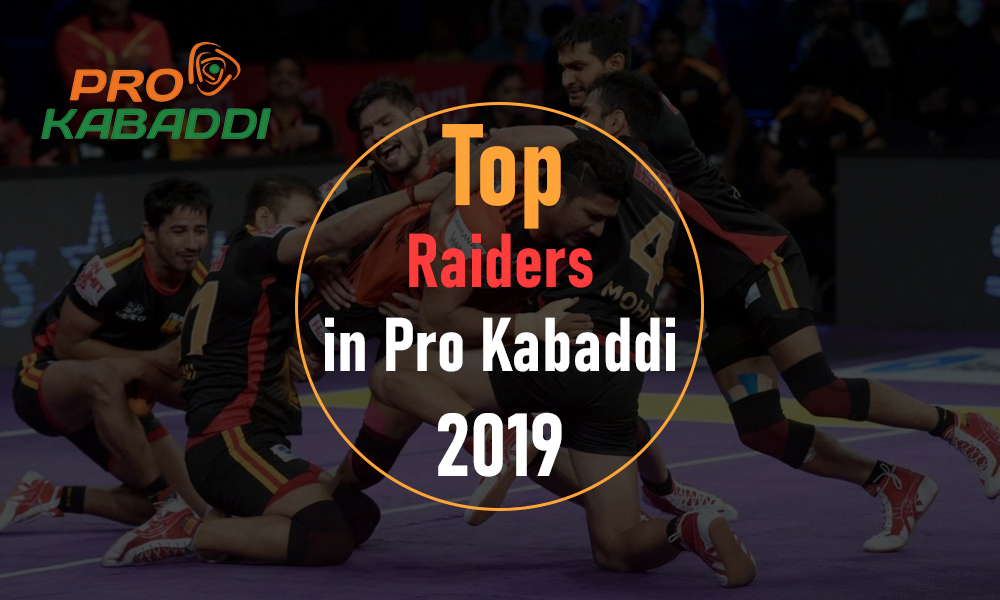 After accumulating 360 raid points from 24 games in season seven, Pawan Kumar Sehrawat of Bengaluru Bulls is at the top of our rankings. The highlight of his performance in 2019 was a record-shattering tally of 39 raid points versus Haryana Steelers. Sehrawat’s prolific form helped Bulls to a semi-final qualification. In a winning burst against Steelers in the Eliminator game, Sehrawat garnered 20 raid points to seal the spot. Aptly nicknamed the Hi-Flyer, Sehrawat is famed for using lower body strength and a long reach to get the better of rival defenders. His exploits in the PKL 7 season preceded his starring role in the Indian national squad at the South Asian Games hosted in Kathmandu, Nepal, where he helped the side to the gold medal.

Pawan Kumar Sehrawat began his Pro Kabaddi career in 2015 with Bengaluru Bulls. His debut season was far from impressive and Sehrawat shifted allegiance to Gujarat Fortune Giants before returning to the Bulls in 2018. Pawan repaid Bulls’ faith in his ability by scoring 22 points in the final against Giants to lead them to their first-ever title win. In the process, Sehrawat finished as the league’s highest scorer that season, ahead of such stalwarts as Pardeep Narwal and Rahul Chaudhari. Predictably, Pawan was named the Most Valuable Player of season six.

Pradeep Narwal of Patna Pirates who had 302 raid points from 20 games in the PKL 7 season is next on our list of top raiders. The highlight of his performance in 2019 was arguably his haul of 15 super raids, the highest of the season. Nicknamed the Dubki King, Narwal registered 13 Super 10s, underscoring his reputation as the best raider in PKL history, though his team failed to get to the knockout stage.

Narwal made his Pro Kabaddi debut in season 2 with Bengaluru Bulls. In a lacklustre season, Pradeep registered only nine points in six games before switching to Patna Pirates in the next season. That decision proved to be the perfect move, paving the way for Narwal’s domination of the league in subsequent seasons. With a prolific string of scores, Narwal earned a reputation for consistent performances and went on to represent India internationally. His brilliance has helped Patna Pirates to three league titles on the trot and seen Narwal named the Most Valuable Player twice.

His 301 raid points in PKL 2019 has helped Naveen Kumar to third place on our list. With 22 Super 10s, including 20 registered back-to-back, Kumar set a new league mark. He also set a record by becoming the fastest to 300 raid points in a PKL season. While Kumar’s exploits — which saw him named the MVP — helped his side to the final, they finished runners up to Bengal Warriors.

Naveen made his PKL debut in 2018 when he helped Dabang Delhi KC to the playoffs. In the process, he became the first player of the new millennium to feature in the league. In the PKL 7 season, Kumar upped his game, resting on his speed and reflexes to underscore his raiding ability.

Siddharth Sirish Desai, the young raider from Kolhapur, played alongside his brother Suraj Desai in Telugu Titans’ squad to garner 220 points from 22 games in the season. While the effort was not enough to get Titans into the playoffs, Desai made an impact in the league for the second year running.

Desai began his PKL career with U Mumba in 2018. He had a sensational start, with a Super 10 on his maiden appearance. During the season, the young raider got to 50 raid points in four matches, setting a league record in the process. In his first six matches, Desai registered as many as five Super 10s. Following the brilliant start to his career in the league, Desai attracted a huge bid from Telugu Titans who made the raider a part of their squad for PKL 7. In fact, the winning bid of Rs. 1.45 crore was the highest price paid for any player at the PKL auction that year. Telugu Titans had to let go of Rahul Chaudhuri — one of the league’s big names — to be able to afford Desai.

Maninder Singh, raider and skipper on league winners Bengal Warriors, could have been higher up this list but for an injury that made him quit during the league stage of the competition. Before a shoulder injury laid him low, Singh registered 205 raid points from 24 games, averaging 13 raid points a game in his last five league matches.

Known for outwitting defenders with his well-thought-out maneuvers, Maninder featured in the inaugural season of PKL, helping Jaipur Pink Panthers to the title. With the most raid points registered that year, Maninder raised expectations only to have to miss the next three seasons owing to injury. He returned to Pro Kabaddi action in season 5 for Bengal Warriors, whom he helped to the title in season 7.