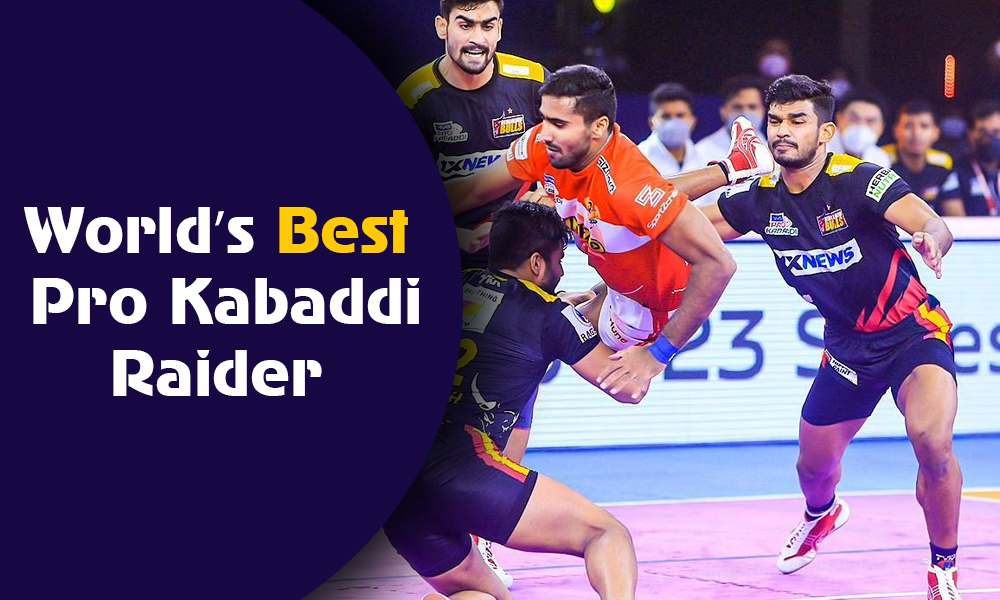 In this article, we look at the career of Pardeep Narwal, arguably the world’s best Kabaddi raider of all time. Narwal has scored the most raid points in Kabaddi, ahead of several illustrious colleagues in the Pro Kabaddi League, the world’s premier Kabaddi league.

On the fast track to kabaddi glory, Pardeep Narwal surprised nobody when UP Yoddha bid a record 1.65 Crores for the champion raider in the 2021 PKL auction, making Narwal the highest-paid kabaddi player in the history of the league.

The Haryana youngster set the tone for the future when in 2015 he debuted for Patna Pirates in the PKL, choosing the occasion to record the highest points among all players that season. Thereafter, Narwal has blazed a glorious path with records shattered in his wake. Not the least impressive of those performances was his 8-point raid in 2017 versus Haryana Steelers. Named the MVP for successive PKL seasons in 2016 and 2017, Narwal registered 369 raid points in season 5 and went on to his second 300-plus haul in season 7.

Renowned as the ‘Dubki King,’ Narwal helped Patna Pirates to three back-to-back titles in his first three seasons with the side. His exploits drew the attention of the national selectors who rewarded the raider with a place in India’s gold medal-winning team at the 2016 World Cup, thus helping Narwal cement his legacy as arguably the greatest player of all time.

While instantly recognisable in Pirates’ green and gold uniform, Narwal actually made his PKL debut with Bengaluru Bulls in 2014. While the Bulls reached the final that season, Narwal had little role to play in a team comprising of such stalwarts of the time as Deepak Kumar Dahiya, Dharmaraj Cheralathan, Joginder Singh Narwal, Ajay Thakur, and Manjeet Chillar. With such paucity of playing time, Pardeep could garner just nine points for the season.

Patna Pirates gave Narwal the perfect platform to advertise his wares. Patna Pirates claimed their maiden PKL title on the back of the exploits of both Narwal and Rohit Kumar who combined brilliantly through the third season of the PKL. The duo helped Pirates upset defending champions U Mumba in the title clash. While Narwal had the most points (121) that season, it wasn’t enough to have him named the best raider — an award that went to Rishank Devadiga. Nor was he named the Most Valuable Player, an accolade taken away by his teammate Rohit Kumar.

After Bengaluru Bulls lured Rohit Kumar away in the next season, Pirates’ fortunes rested solely on Narwal’s shoulders. Pardeep lived up to the expectations, and how! In another brilliant season, he ended up garnering 131 raid points, with only Rohit Kumar with 146 ahead of him. Like all champion players, Narwal stood up to be counted when it mattered most — in the final versus Jaipur Pink Panthers. His tally of 16 raid points helped Pirates edge out the Panthers 37-29 en route to their second successive title. This time around, Narwal was the sole claimant of the MVP award, while becoming the youngest player to gain the honour.

Highest Ever Points Tally in 2017

But the best was yet to come. If his exploits in seasons 3 and 4 were the appetiser, Narwal served up the whole meal in season 5, smashing several records in the process. He needed the season with 369 points, the highest ever aggregate in the PKL, 150 points adrift of Rohit Kumar who had the second-highest tally. In the process, he led Pirates to their third title on the trot. The icing on the cake was Narwal’s 34-point showing versus Haryana Steelers in the second eliminator of the playoffs.

After setting the highest points-score of 369 in 26 games in season 5, Narwal was named best raider and MVP. He thus became the first to achieve both feats in a single season, as well as the first to win the MVP award twice. Two seasons later, he scored 302 points, becoming the first to top 300 points in more than one season. He also became the first to scale the 1000 raid points mark. The record holder with the most super 10s and more than 50 super raids in the PKL, Narwal has shone for India as well. His three gold medals in four international competitions stand testimony to his reputation as the greatest raider of all time.